Supporting the weight
of the clouds. You’ve been doing
it for years, my girl.

Note
If there’s one kind of poetry I don’t like it’s the type that attempts to blow up a perfectly normal situation into something “poetic” (and subsequently usually asking rhetorical questions along the lines of “why oh why is this happening to oh so sensitive poor poor me”). Sometimes I picture these poems hitting their author in the face like a balloon burst from overinflation with all that fake meaning.
Posted by World So Wide at 12:29 AM No comments:

Back when we were hunters and gatherers 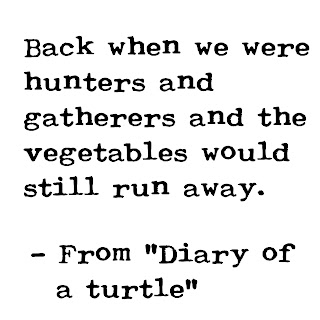 From the soon to be released book Diary of a turtle.

Posted by World So Wide at 4:52 AM No comments:

The Dr. Who haiku

Notes
The fun(ny)/weird haiku keep coming.
Short as usual and mercilessly.
Again with dialog. Against the rules.
(Nín hăo = hello in Chinese.)
Posted by World So Wide at 3:34 AM No comments:

Shot in the arm vein.
“Now speak the truth.” Was this to
be the end of me?

Note
This was inspired by various things I read, saw and associated this morning. Plus there are these novels in 3, 4 or 5 words going around. This one has 17, so it can be called an epic. And it can pride itself of having dialog, which is rare for a haiku.
Posted by World So Wide at 2:55 AM No comments:

Watched five minutes of another Aliens invade the world movie. Actually, we’re doing such a good job of destroying the world ourselves that aliens are not needed.

Note
What poetic form would this be? There is such a thing as an American sentence (invented, I believe, by Allen Ginsberg in an attempt to Americanize the haiku). But this is two sentences. So it is a little more un-American than an American sentence, also in view of the fact it doesn’t pay attention to any particular number of syllables. This poem is dedicated to Richard Brautigan because he might have written a poem similar to this.
Posted by World So Wide at 9:39 AM No comments:

(An exercise in straining the imagination)

Notes
How much of a haiku is allowed to be outside the haiku?
There is a lot that’s outside this one.
First of all the inspiration, which was a photo of some big animal that had died in an art installation (well, admittedly I’m sure it had died before if it had ever lived).
So I placed an equally huge animal in the middle of the haiku and made extra sure that it could be identified as the centerpiece by repeating the middle part.
But now comes the other thing that’s outside the haiku: the building this installation is in. The lupodopteryx is in the center of a central room, which is blocked off for visitors by ropes strung up between the columns supporting the structure. This room is surrounded by a ring-like hallway, from which the lupodopteryx can be seen through the spaces between the columns.
Any gallery or museum dying to house this installation is most welcome to contact me.
Posted by World So Wide at 1:05 AM No comments:

Not
a
thing is
better than
waking up from the
thunderous farts of a motor-
cycle at 6 a.m. right in front of your window

Note
I know, I know – today’s not Sunday. But the thunderous memories from last Sunday kept inspiring me...
Posted by World So Wide at 6:28 AM No comments:

Let me assure you that there’s no need to worry – there are many new, exciting and absolutely groundbreaking products in the iPipeline. Here’s a short list (in alphabetical order by product name) of what to look forward to within the near future:

Will Apple be able to deliver and sustain innovation, shareholder value and inflated product prices over the years to come despite maturing markets for its current products? Given the multitude of leading edge developments outlined above, the answer can only be a glaring YES!

And in retrospect
even that mighty lion
seems small and mousy.

Inevitable notes
Even though I take pride in not wasting words in haiku, I left in the leading “And” – it works well as some sort of intro; try it out for yourself and remove it, and you’ll see that the poem starts too abruptly. Also, when I was writing this in my mind, I had a “somewhat” qualify the “mousy”. However, shortage of syllables available lets you have it full blast now.
Posted by World So Wide at 12:16 AM No comments:

The senility or what haiku

Using words not re-
remembered to talk about con-
cepts not remembered.

Notes
What was that about again?

The sounds of silence haiku

Dedicated to Simon and Garfunkel

How many who love
the song have ever truly
listened to those sounds?

Note
This alludes to the paradox of the song: the sounds of silence cannot possibly be a song – they can only be silence. Right? But then it could be said that silence is not always something desirable (like the silence of meditation, for example) but might be terrifying or threatening, as in the song, where it grows like a cancer...
Posted by World So Wide at 2:11 AM No comments:

The poetry as I see it haiku

Poetry's job is
not to regurgitate pop-
ular platitudes.

Notes
If poetry has a job (some might argue that it is too sacrosanct to have something so mundane, while others might say that it is permanently jobless), then it should be more meaningful than to replicate favorite platitudes and attitudes and well-trodden ways of seeing, thinking and feeling. In an age where taste seems to be dictated by the number of likes or little hearts something gets, this is all the more important to keep in mind ... lest poetry completely descend to the democracy of insipidity.
Posted by World So Wide at 2:22 AM No comments:

The I do not like a certain kind of insect haiku

My poor legs are shot
full of mosquito poison
and itching, itching

Note
The truth and nothing but the truth. Razor-edge-of-time reporting from the Roman office work front.
Posted by World So Wide at 1:21 AM No comments: