It is sovereign
in weight distribution, bright
ease and breeziness

Note
Most haiku (at least the ones that come to my eyes) are pretentious – in insinuating they have to offer something worthwhile – as well as flat sprat on their face in attempting to create a moment of instant recognition – that special haiku specialty – that usually is neither instant nor recognition. So, once again, I decided to add to the mass with a haiku that is definitely pretentious as well as completely devoid of any instant recognition.
Posted by World So Wide at 7:48 AM No comments:

Edward Dorn on the need for poetry 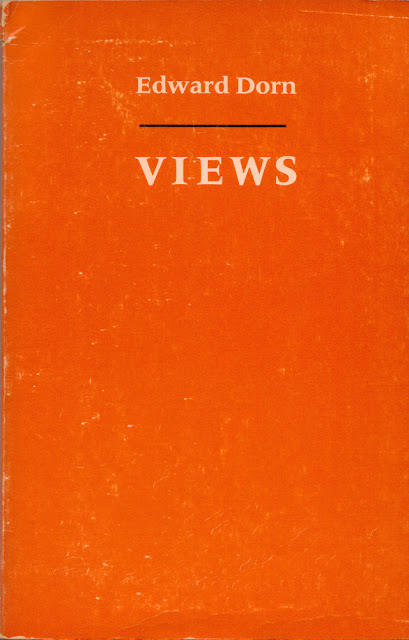 I have no illusions whatsoever about people at large being in need of poets or their work.

Note
Not having read much lately - due to lack of time and motivation -, I picked a book from the shelf next to me yesterday, which happened to be the one shown above, opened it and came across this devastating* statement on the need for poets and their work. Actually, I must admit to have been thinking along the same lines. According to Marx, man's basic needs (such as food, clothing, etc.) must be fulfilled before there can be any artistic impulse. Not sure it's as simple as that. I am surrounded by thousands of people - and that's just the area I live in - whose basic needs are definitely covered or more than covered, but whose artistic impulse continues to remain remarkably underdeveloped. It's hard to picture them enjoying anything but pizza, soccer, car races, their cell phones and occasional sex. In fact, they appear to be perfect implementations of Marx's materialist view of man.

*Devastating for poets and their self-esteem.
Posted by World So Wide at 7:59 AM No comments:

Can quote Dylan. Can
quote Cohen. Can quote Springsteen.
Cannot quote myself.

Note
It’s true – I can quote from an infinite number of songs by the people named above, plus a zillion others, like Joni Mitchell, Richard Thompson, Neil Young, Gianna Nannini, Gianmaria Testa, Labordeta, Chavela Vargas, Amparo Ochoa, Soledad Bravo, Ralph McTell, Cyndi Lauper, etc., but I cannot quote from any of the poems I’ve written, even though they must number in the thousands by now. Well, except from one of my first ones, written in German when I was around ten, about some flower I claimed to have found deep in the forest.
Posted by World So Wide at 3:44 AM No comments: