For S.
Still,
after so many years,
that flowery perfume
encountered
on anyone
anywhere
will jostle up remnants
of a love
long buried.

Don't worry –
that love
has been resting in peace
and does not
compete with yours.

Written around fragrant, jostle, remnant from 3WW.
Posted by World So Wide at 6:38 AM 6 comments:

Proverbs from the Chinese VIII

True nurture will not be provided by even the most diligent amateur.

– Translated from the Chinese by Leonard Blumfeld

Notes
Fits in nicely with today's choice of words from 3WW: amateur, diligent, nurture.
I'm not sure whether I agree with the statement. There's love in the effort of amateurs (as the word implies), which may be lacking in professionals. Why should an amateur's love not nurture?

A what's around haiku

Genesis notes
You sit and look at what's around you, make a selection and a haiku out of it. That simple.
Posted by World So Wide at 1:24 AM No comments:

"What would you rather have as a miracle –
a world free of strife and war
or personal happiness?" Suzanna's guru asked

She brought the question home to her non-believer boyfriend

"Let me see any kind of miracle
before I decide on that one,"
said Jeff the sceptic

"That's typical you," she yowled,
"all you try and do is take the wind out of my sails."

"No wind, no sails that I see,"
said laconic Jeff
"Why have I been putting up with you
for so many years, Jeff? A man
with such a flat view of the world?"

"That is a miracle, I agree,"
said grinning Jeff

The topic at One Single Impression was miracle.
Posted by World So Wide at 7:31 AM 3 comments:

Yolanda of the baffling glitter

Yolanda had a baffling glitter
around her big blue eyes.
She thought this made her fitter
than one would realize.

Most days she'd concentrate
on elegance of looks
and rather did negate
the importance of science books.

The teachers did not go for glitter,
so in her exams she fared not well.
This made Yolanda very bitter.
She told 'em they should go to hell.

Written around baffle, elegant and negate from 3WW.
Posted by World So Wide at 7:50 AM 5 comments:

This is a modern poem

It is trendy and online,
knows what iPad and iPhone are
and was written
while eating an apple.

Written upon inspiration by Sunday Scribblings.
Posted by World So Wide at 11:58 PM 1 comment:

Haiku of the lost tribe

The tribe is lost. Not
enough magnetism. Outcast
searching for new tribe.

Sort of a continuation of Qasida of the lost tribe. Cryptic, I know.

Sometimes, due to tribal instinct, you search for love in the wrong tribe. In this case it happened to a dear friend.
Posted by World So Wide at 12:57 AM No comments: 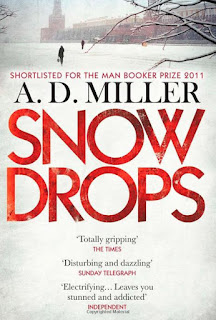 (Warning: This is a more or less polemic blurb without any claim to thoroughness or completeness.)

Finished reading Snowdrops this weekend, a novel about a British lawyer who becomes involved in fraud in his work for an investment bank, and, in private, in a case of apartment fraud as a consequence of falling in love with a mysterious Russian woman.

So what's true about the hype?
'Totally gripping' – more ho-hum than gripping. Took me numerous sessions to read and is certainly not one of the potboilers you cannot put down.
'Disturbing and dazzling' – draws a disturbing picture of Russia and Moscow. Greatly reduced my readiness to ever go there.
'Electrifying ... Leaves you stunned and addicted' – That opinion, pardon my bluntness, is a striking example of pure bullshit. Seems more appropriate to LSD, heroin or some other drug than anything written.

As it says on the back cover, there is some similarity to the writing of Graham Greene, but more along the lines of imitation. Neither the writing itself nor the plot are that good. There is that Greene-like feeling of guilt, but there's so much insistence on building it that it becomes annoying. The confessionality (the story is told as a confession to the hero's fiancée) is also reminiscent of Greene, except that it never comes alive, so to speak, because the person the story is told to remains nondescript, making the whole device seem irrelevant.

Then there's that constant puerile harping about how awful it is to be older than thirty. (I believe a lot of people have successfully moved on even into their forties or fifties.) And the annoying premonition building (along the lines of 'I should have known better then that ...', 'Had I not ...') that seems to come straight out of a fiction writing workshop manual. And then there are all the attempts to humanize inanimate objects with adjectives that mostly didn't do much for me. That's the literary touch, I suppose.

A third plot line – pretty much unrelated to the other two – is about the body of an old man found in a rusty orange Zhiguli (mentioned umpteen times in the course of the novel to make it absolutely clear that it has to have some significance).

You may rest in peace, Graham. This ain't no serious competition for The Third Man or The Quiet American.

– Leonard "Won't Write Reviews" Blumfeld
Posted by World So Wide at 3:04 AM No comments:

Sails in the Sunset

Now if you'd drop that stupid demand to get close to Crinkle Island, I'd be happy to navigate you all to that forsaken part of the beautiful stormy South Seas, my friends.

As to Norah Femme Fatale, however, I'd rather not have her on board because she might try to persuade me after all. And we all know from Italy how that can end.

Written around crinkle, demand and navigate from 3WW.

A blatant derivative of the Costa Concordia disaster.
Posted by World So Wide at 2:33 AM 1 comment: