How's your personal weather today?
I'm a bit under the weather. Quite a bit under the weather, actually.
So what happened to cloud your skies?
There's an uncomfortable draft in my face, but also some stillness that isolates me.
Oh my! Whereabouts are you?
Stuck in the desert of my own mind and feelings as usual.

– Len "Mind Desert" Blumfeld
Posted by World So Wide at 7:12 AM No comments:

And they said to each other ... 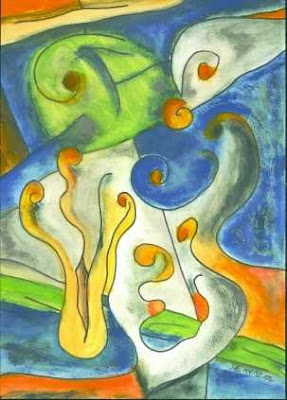 And they said to each other, "We need
glasses so we can see. Because, as it is
now, we have no vision."
And one of them continued, "We have
been self-indulgent way too
long. This has got to stop."
But where to go in this land
without opticians, and how to slim
down on indulgence?

The painting is gouache on paper and dates from 2002

Posted for Inspire Me Thursday and Glasses as well as Sunday Scribblings #171, Indulgence.
Posted by World So Wide at 3:41 PM 1 comment: 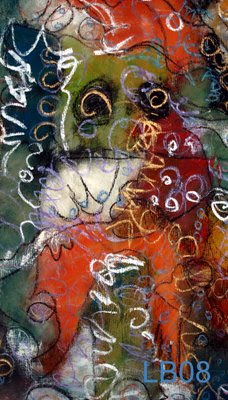 Owl
Gouache and oil crayon
on wrapping paper, 2008
(detail of a larger painting)

Posted for Inspire Me Thursday's Owl.
Posted by World So Wide at 1:02 PM 2 comments:

For A.B. as usual
She had on a smile occasionally
and sang a little bit.
Maybe she's in love with somebody.
But me it would be not.

Posted for 'human' at Sunday Scribblings.

Written in a somewhat epigonal vein running from Amaru to about Rabindranath Tagore.
Posted by World So Wide at 6:43 AM 4 comments:

PN: Thanks for the opportunity to interview you, Mr. B.
LB: Call me Len, please.
PN: Mr. B., you told us that you have a history of being invisible...
LB: Yes, that happens sometimes.
PN: What happens exactly?
LB: I'm among people and say something, and it's as if I wasn't even there, or in a different time slot.
PN: That sounds quite speculative. What about the other people – do you see them?
LB: Yes, they seem quite normal to me.
PN: And you consider yourself the abnormal one?
LB: Yes.
PN: Like you're not fit to be around the human race?
LB: Yes.
PN: Has it occurred to you that you might be an alien?
LB: Alien, yes, but not an alien.
PN: ...
LB: You were saying?
PN: ...
LB: Yes?
PN: Mr. Blumfeld, where are you? Are you there? Hello?
LB: (can obviously no longer be seen or heard)
PN: This, dear audience, was the interview with Leonard Blumfeld – a man who said he had illusions of invisibility and who indeed has become invisible.